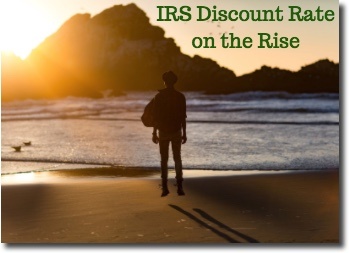 After six years of drifting around in record-low territory, the Applicable Federal Rate, otherwise known as the IRS discount rate, has leaped upward 0.6% this month to 2.4%. That’s the highest the rate has been since mid-2014.  The leap was a direct consequence of the Federal Reserve raising its target for the Fed Funds rate in mid-December. What’s more, the Fed has indicated it expects to raise the Fed Funds rate in increments three more times during 2017. That would portend further increases in the IRS discount rate over the next 12 months.

CLAT and RLE Donors Have Incentive to Donate Immediately

In the case of a lead annuity trust (CLAT) and retained life estate (RLE), the deduction is highest when the IRS discount rate is lowest. Through the end of January 2017, donors of these gifts will still be able to compute their deduction using November 2016’s rate of 1.6%. They’ll have to use a higher rate after that. The tables below give you a sense of the difference a change from 1.6% to 2.4% and possible further increases will make in the deduction a CLAT or RLE donor can take.

Deductions for a retained life estate for a 75 year-old, funded with property worth $500,000 that includes a house worth 2/3s of that:

Donors considering a lead annuity trust or retained life estate would do well to act by the end of January. The charitable deduction available to them will be significantly less after that.  Should the IRS discount rate reach 4% by the end of 2017, the deduction for either of these gifts will decline 20% over the course of next year!

An increasing IRS discount rate has the opposite effect on gift annuity and remainder annuity trust deductions: they go up when the rate goes up. The table below shows the results for a 5.8% gift annuity for a 75 year-old, funded with $50,000.

Notice that while the deduction increases about 16% as the IRS discount rate increases from 1.6% to 4.0%, the tax-free portion of the annuity decreases by the same proportion. These two consequences of an increasing IRS discount rate tend to offset each other.

The deduction for a comparable remainder annuity trust (CRAT) would be exactly the same as for the gift annuity, but without the offsetting decline in tax-free portion. The increase in IRS discount rate has another benefit for CRATs, however. The minimum age at which a 5% CRAT passes the 5% probability of exhaustion test declines as the IRS discount rate increases. The table below shows that the minimum allowable age of a CRAT beneficiary would decline from 74 to 58, should the IRS discount rate increase to 4.0%. An increase of this size would greatly expand the pool of potential CRAT donors.

The IRS discount rate appears to be on the rise after many years at rock-bottom levels.  In the near-term, this change creates strong incentive for donors considering a CLAT or RLE gift to take action. In the longer term, continued increases in the IRS discount rate bode well for attracting gift annuity and CRAT gifts. As soon as possible, you should contact prospects with whom you have been discussing a CLAT or RLE gift to let them know that their tax deduction is likely to be greater if they make their gift by the end of January 2017. You may also want to share with your CGA and CRAT prospects the good news that their deductions may be higher than previously discussed if they proceed with their gift. Your prospects will appreciate the information and the attention.

I haven’t mentioned remainder unitrust or lead unitrust gifts (or pooled income funds, remember them?) in this post because their benefits are affected very little by fluctuations in the IRS discount rate.

Dealing with a 1% IRS Discount Rate

The trend of the ultra-low IRS discount rate introduces some risk to charitable gifts – specifically, it increases the […]

In the realm of gift planning, there are a number of terms that we use often. For those new to gift planning or those […]

October’s IRS Discount Rate of 1.4% will be the lowest rate ever, putting further downward pressure on charitable […]