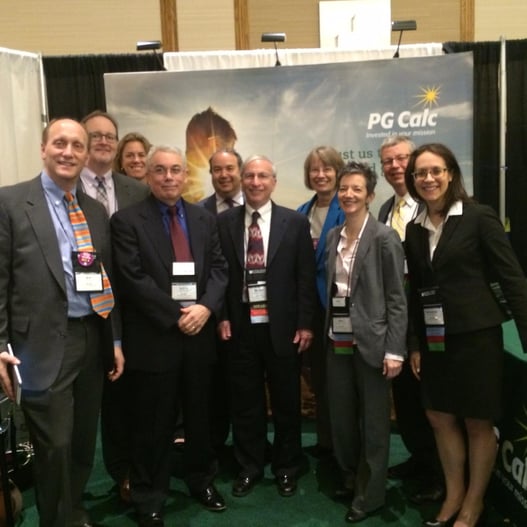 Last week ten intrepid members of the PG Calc team from Cambridge, Philadelphia, Seattle, and Cincinnati swooped into St. Louis to attend the 32nd ACGA Conference put on by the American Council on Gift Annuities.  There were over 500 people in attendance and while I’m pretty sure we didn’t meet everyone, we did catch up with hundreds of clients and prospective clients from all over the country.  In fact, I had a nice conversation with an attendee from Jerusalem and had dinner at an awesome Peruvian restaurant so I think it’s fair to say it was a truly international event.

One of the highlights of our exhibiting experience was giving on-site evaluations of planned giving websites.  Sometimes the tension was palpable as Andrew, our Director of Marketing Services, used the Socratic method to tease out from our visitors what parts of their sites they thought were working for them or against them.  Sometimes a small crowd would form and there would be good-natured ribbing about some sub-par web presences.  Notes were taken and cards were exchanged!

We also got to display our new large booth background, which shows a climber being helped up onto a ledge.  We think this imagery is apt not just for our Consulting work, but for all the things we do where people trust us to guide them.  You may have seen Genevieve, our new Sales Associate, steaming out the wrinkles before the show officially opened, but such are the details in being ready to host so many people at the booth.

Edie and Mike, along with our client Dianne Armstrong, led two fantastic sessions about the intricacies of Gift Annuity State Compliance.  For those in the know, it’s really just a matter of proceeding steadily and fulfilling the requests of the regulators, but those who abstain from getting it right do so at their own peril.

There were lots of other good sessions that people attended, good food in the exhibit hall and at the plenaries, and even some surprises from the Lead Co-Chair.  But from my perspective, this conference was a big hit based on the smiling faces we saw, and the questions we answered as all of you dedicated folks in planned giving interacted with us.  See y’all at the 33rd ACGA Conference in Seattle in 2018, if not many times before.