Home > Insight & Education > Information Resources > Blog > Why Are the K-1s Late Again This Year?  Why Are They Late Every Year??

Why Are the K-1s Late Again This Year?  Why Are They Late Every Year?? 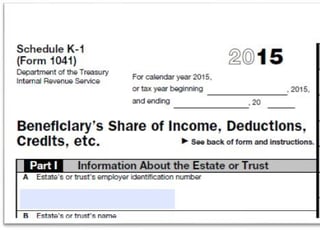 It happens every year – your gift annuity donors received their 1099-R forms at the end of January, and everyone was happy. But once the calendar turned to February, the calls started coming in from your charitable remainder trust donors; they are looking for their K-1 forms, which report the income they received from their trusts. If you have a pooled income fund, you’re getting calls from those donors too, because they are also entitled to a K-1 form. And once the calendar turns into March, the calls get uglier. Everyone expected to receive their tax forms around the end of January, because that’s when all tax forms are due, right?

WRONG. Unfortunately, the beneficiary tax forms from CRTs and PIFs – the K-1s – are completely different from the gift annuity tax forms. The 1099-Rs are produced each year based on the original gift information – the tax treatment for payments from gift annuities is established when the gift annuity arrangement is created. The K-1s, in contrast, are part of the trust tax returns, which are the result of an accounting process that has become more complex and more prone to delay in recent years.

In fact, they are not required to be sent by the end of January, or by the end of February, or even by the end of March.   So when exactly are the K-1s required to be sent? As part of the tax returns for the trust or PIF, the deadline for sending the K-1s (and their state counterparts where applicable) is April 15. That’s right – the K-1s must be sent by April 15. The reality is that they are usually sent long before that date – any trustee or sponsoring charity of a CRT or PIF understands that the beneficiaries want to receive their tax forms as soon as possible so that they can file their own tax returns.

The best advice is to let your PIF and CRT beneficiaries know that the K-1s are underway and right on schedule – and to remind them next January about the timeframe, which is, unfortunately, the same every year.

Ready or not, it’s year-end again, which leads us right into tax season – that “most wonderful time of the year!” Here […]