Posted by Gary Pforzheimer on September 3, 2014 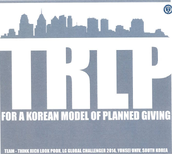 This past week, PG Calc’s Cambridge office received a visit from team "Think Rich Look Poor" (logo shown left). The group, comprised of four intelligent and articulate students from the prestigious Yonsei University in Seoul, was funded by the LG Global Challenger program, which tasks undergraduates with an international research project on a topic of their choosing and rewards the winners with a scholarship.

Semo Goo, Hyojin Koo, Haeun Shin, and Jeongseok Oh elected to explore how to bring planned giving to South Korea and visited several U.S. sites over a two week period. They sure had done their homework, coming prepared with great questions and insights.

According to their research, South Korea’s charitable giving lags behind other developed countries, ranking 57th in the world, as compared to the United States, which ranks first. They feel this is due in part to the significantly lower tax benefits provided by the Korean government for charitable gifts. They believe planned giving represents a way to tap the disproportionately small number of rich Korean donors. But, in addition to legislative limitations, they are concerned that there are psychological barriers to implementing planned giving programs, including a mistrust of NPOs and bias against large gifts. The students hope their visit to the States will give them perspective on the obstacles to planned giving programs at home.

I greatly enjoyed our discussion, which included the history of planned giving in America and PG Calc’s role in making it possible for planned giving techniques to be available so widely. The students were particularly interested in how gifts are marketed to donors, and PG Calc’s focus on marketing. The team hopes that donor stewardship tactics practiced in the U.S. could help alleviate some of the psychological roadblocks to South Korean planned giving programs.

Semo Goo, Hyojin Koo, Haeun Shin, and Jeongseok Oh will submit their proposal, "Finding the Right Direction of a Korean Planned Giving Model"  this fall. We wish them luck in beating their competition!

The students were so grateful to their hosts, they sent us this Thank You card, along with a photo they printed during their visit with a portable LG printer!

This is the enlarged photo of Semo Goo, Hyojin Koo, Haeun Shin, Jeongseok Oh, and me.