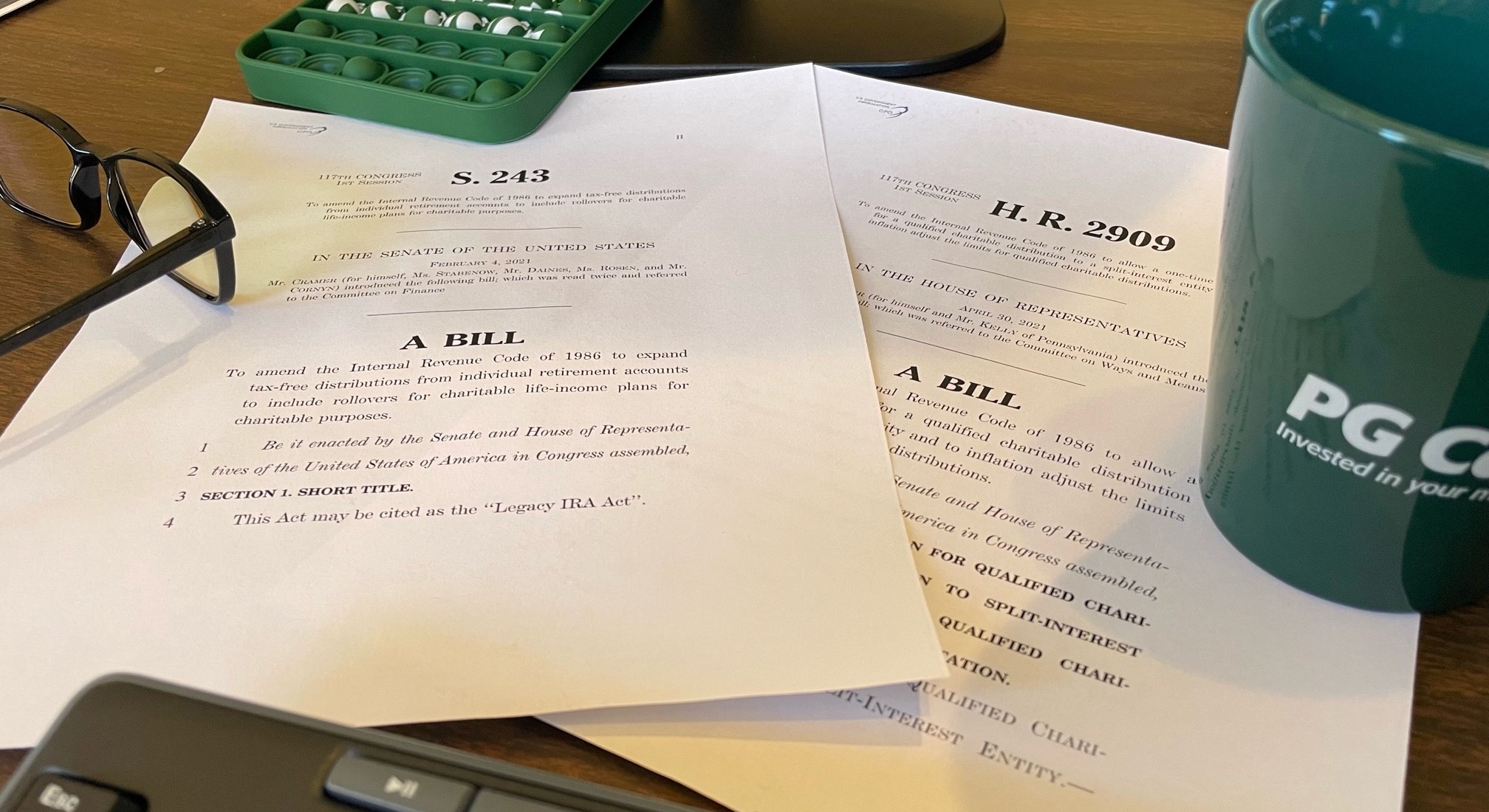 Is the Legacy IRA Act the Next Big Thing?

The “Legacy IRA Act” would allow a Qualified Charitable Distribution (QCD) from an IRA to fund a split interest gift (charitable gift annuity (CGA), charitable remainder unitrust (CRUT), or charitable remainder annuity trust (CRAT)). At the time of this writing, this proposed change has been included in pending legislation that is, alas, stalled as the 117th Congress heads toward adjournment in December 2022. If the Legacy IRA Act provisions are not passed this year, there are plans to reintroduce the legislation when the new Congress convenes in January 2023.

What are the chances the Legacy IRA Act will become law? And, more importantly, what should you be telling prospective donors? Before we get to those key questions, let us review the proposed Legacy IRA Act and its journey through this Congress.

The essential element of the Legacy IRA Act is a provision allowing donors to make a Qualified Charitable Distribution either in exchange for a CGA or to create a CRUT or CRAT. Two different bills, both titled the “Legacy IRA Act,” were introduced earlier in the 117th Congress. In the Senate, S.243 was introduced on February 4, 2021 by Senator Kevin Cramer (R-ND) and has six bipartisan cosponsors. In addition to allowing QCDs for split interest gifts, S.243 would increase the limit for outright gifts of QCDs made directly to charity from $100,000 to $400,000. In the House of Representatives, H.R.2909 was introduced on April 30, 2021 by Representative Donald Beyer (D-VA) and has one bi-partisan co-sponsor. Both bills would allow a QCD for split interest gifts up to $50,000 (in addition to the applicable limit to outright QCDs), and that amount would be adjusted for inflation each year.

There has been no action on either S.243 or H.R.2909. However, a provision allowing a limited QCD for a split interest gift has been included in two bills that recently passed Congress: S.4808, the “Enhancing American Retirement Now (EARN) Act” and H.R. 2954, the “Setting Every Community Up for Retirement (SECURE 2.0) Act.”

The Legacy IRA provisions in both bills are identical. They allow an aggregate amount of QCDs up to a $50,000 limit for CGAs, CRUTs, and CRATs. The language of both bills allows a donor to establish multiple split interest gifts with QCDs so long as the aggregate amount of these gifts in the year they are made does not exceed $50,000. However, the election to make a QCD to a split interest gift may be made only in one tax year, even if the aggregate total does not exceed the $50,000 limit.

The Legacy IRA provisions would also introduce indexing of QCD limits for inflation. This change would increase the current $100,000 annual limit on QCDs to fund outright gifts, as well as the $50,000 limit on the one-time only QCD to fund a gift annuity or charitable remainder trust.

Readers will recall from Civics class that legislation must pass both the House and the Senate in exactly the same form before it can be sent to the President for signature. When similar but not identical bills are passed, as is the case here, the regular order is for the leadership of each chamber to appoint a Conference Committee to reconcile the differences in language and send the amended bill back to each chamber for a final vote.

Although the Legacy IRA Act provisions in both bills are the same, the EARN Act and SECURE 2.0 Act are large and complicated bills with other significant differences that must be reconciled before a final vote. Under the best of circumstances, even if there is no controversy or discussion necessary, the reconciliation process is time consuming. Unfortunately, the legislative clock for this Congress is running out. Due to the holidays, there are very few legislative days left in 2022, and Congress has some high priority legislation (e.g., increasing the debt limit) with which it must deal before adjournment.

However, this is not the end of the line for the Legacy IRA Act. Recalling Civics class again, every bill that has not passed both chambers when this Congress adjourns is considered dead but can be re-introduced when the new Congress convenes in January. At this point, the most likely outcome seems to be that the EARN and SECURE 2.0 Acts will need to be reintroduced and begin the process again in the new Congress. Given the split Congress, some have speculated that the new Congress may act quickly on these measures in order to provide an early demonstration of bipartisanship, but time will tell.

What to Tell Donors

There has been significant publicity about the potential opportunity to make a QCD for a split interest gift. Prospective donors may be confused or wondering what to do. Rather than suggesting that donors wait for a charitable gift planning opportunity that might become available at some point in the future, it seems more prudent to encourage giving now. QCDs remain a very tax savvy way for any donor over age 70½ to make an outright contribution. A QCD provides significant tax savings, even for those who do not itemize. And for those subject to required minimum distributions, a QCD can help satisfy the required distribution without generating taxable income.

Some day we may be able to offer QCDs for split interest gifts in addition to outright QCD gifts, but, at this point, that is speculation. We will continue to monitor the Legacy IRA initiative and be ready to incorporate this new gift planning tool into your planned giving program when it becomes reality. In the meantime, keep encouraging your donors to use QCDs to make outright gifts to your charity.

The IRA Charitable Rollover: What Next?

The IRA charitable rollover came into being with the Pension Protection Act of 2006.  It expired at...
Read More

Tax Implications of the Infrastructure Bills: Keep Calm and Carry On

At best, the current status of tax legislation is confused. There are two major pieces of...
Read More

The Infrastructure Bill … Nothing to See Here for Charities